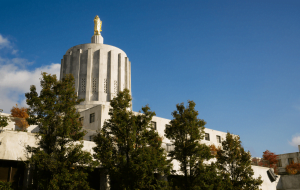 The 2019 legislative session was long and bruising. While Jessica Stanton, Oregon Right to Life’s lobbyist, pounded the proverbial pavement in the halls of the Capitol, pro-life advocates backed her up. Over 10,000 emails were sent to legislators and over 1,000 phone calls were made.

Here is what we accomplished:
We knew going into the session that assisted suicide supporters were going to attempt to expand Oregon’s Death With Dignity law. This proved correct as, early on, four bills were introduced that would negatively impact Oregonians.

Senate Bill 178 gave health care representatives broad authority. However, the original draft eliminated the requirement that a representative be appointed according to an ordered list of people most likely to know the incapable patient’s wishes. The night before the bill was voted on, we asked every senator to oppose the bill as written. The next day, the Senate sent the bill back to committee, where an amendment reinstating the removed language was unanimously adopted. The fixed bill passed and the governor signed it on June 2.

Our biggest fights were against two bills: House Bill 2217 and Senate Bill 579.

Oregon’s physician-assisted suicide law contains a frightening loophole in which someone else could get away with administering the drugs to a helpless victim. HB 2217 would have expanded this loophole by changing “taken” to “self-administer.” “The word ‘taken’ was specifically chosen when the law was passed,” says Lois Anderson, ORTL executive director. “It was selected so that it was clear that it was a conscious individual picking up the medication, placing it in their mouth and swallowing it.” By adding “delivering by another method,” the sponsors attempted to redefine the law to allow the drugs to be administered through an IV, feeding tube, injection, or even through a gas mask.

Senate Bill 579 removed the 15-day waiting period for people who are near death. This makes it substantially easier for malicious people to pressure a dying person to request, receive, and take lethal drugs rather than consider other options.

“While it is incredibly hard for physicians to accurately predict someone’s life expectancy,” says Anderson, “It is not incredibly hard for a person in a position of influence to bully a sick person into obtaining lethal drugs. Eliminating the waiting period will make this even easier.” We were able to stop HB 2217. Unfortunately, despite a months-long battle, SB 579 became law. Our hands are very much tied at the legislature since there is a supermajority in favor of ending life prematurely.

Despite the supermajority, pro-life legislators joined with us to introduce five pieces of legislation that would bring Oregon closer to protecting life: a fetal tissue research ban, a ban on abortions after 20 weeks, a sex-selection abortion ban, a bill to require medical care for babies born alive at an abortion clinic, and a conscience protection bill. Ultimately, the supermajority refused to allow these bills a fair vote.

We remain undaunted. There will be a short session in February 2020. Please make sure you are signed up for text alerts as bills move incredibly fast during short sessions. Text “ORTL” to 52886.