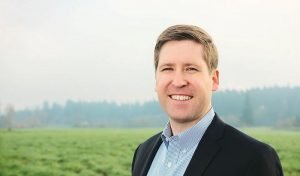 Former Oregon Right To Life Political Director Colm Willis won a decisive victory in Congressional District 5 with a 36 percent margin and will now face Kurt Schrader in the fall general election. Willis ran an outstanding campaign with great grassroots and financial support, raising more money before the primary than the Republican nominees of 2012 and 2014 raised for their entire election budget combined. This money was certainly needed, as Willis faced two opponents, one of whom was supported by an out-of-state Super PAC that spent over a quarter million dollars on advertising.

Willis won so big that he was almost immediately added to the National Republican Congressional Committee’s Young Guns program, which means that the Willis campaign has met the requirements for this to be considered a competitive race. Most importantly, this program puts Willis’ campaign on the radar nationally and could qualify him for future campaign support from the National Republican Congressional Committee and other groups interested in electing conservatives to Congress.

Congressional District 5 ranges from Lincoln and Tillamook counties east to Polk and Marion counties, and north to about half of Clackamas County and a slice of Multnomah County. If you live in this district, we encourage you to support Colm Willis, as he is the best chance in years for a strong pro-life candidate to take back the 5th District seat from Kurt Schrader.