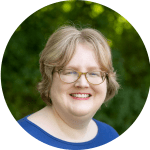 Oregon Right to Life’s educational booth at the Oregon State Fair was certainly inspirational for the tens of thousands of visitors. Lives were changed as fair-goers handled lifelike baby models, watched the developmental video, and listened to the baby’s heartbeat on our special retro telephone. Our volunteers captured moments from their own experience serving at the booth which we want to share with you.

“‘Very positive’ was the response from Leslie [not her real name] who almost had an abortion. She was actually on the table for the procedure and had the overwhelming feeling that she needed to protect her baby…they tried to talk her out of leaving and wouldn’t give her back her clothing! She left in the hospital gown!”

“A lady was shocked that late-term abortions were allowed in Oregon. I gave her a pamphlet that gave abortion statistics and policies in Oregon.”

“I explained the ‘vote with a quarter’ game to a young girl who wanted to vote yes but all she had was a penny. She asked if she could put the penny in. I said, ‘Of course!’ That’s a very special penny.”

“A young family with grandparents came by and shared their story. The mom was advised to abort because of the baby’s health. She said, ‘That’s not an option.’ We met her two-and-a-half-year-old son. He was born four weeks early and survived his medical condition.”

“Maggie [not her real name] is 18-years-old and her baby Payton [not her real name], an 11-month-old chunky baby girl with blue eyes, stopped by the booth. Maggie’s ex-boyfriend told her several times, ‘There’s a pill you can take for that.’ But she didn’t abort her baby. Maggie has grandparents who support her and is part of a teen moms group. She will attend Chemeketa Community College this fall. She says she and Payton do everything together and Payton is her life. She doesn’t regret her decision at all. Maggie said Payton brought light to her life when she was in a very dark place.”

We had an adoptive mother tell us the child she adopted was alive through the work of a booth like ours.

Many thanks to our amazing volunteers for another great year at the state fair and to all of our supporters for making this opportunity possible. We are making a difference as we share the humanity of the pre-born.