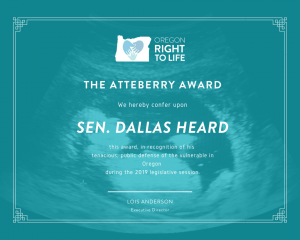 We are fortunate to have so many advocates fighting for life in the Oregon Legislature. This year we began a new tradition with the Atteberry Award. This award is named in honor of Gayle Atteberry, our long time former executive director who began her career as Oregon Right to Life’s first full-time lobbyist in the Oregon Capitol. The award will be granted following each legislative session to members of the Oregon Legislature who, like Gayle, are tenacious in their public defense of Oregon’s vulnerable.