Monday, July 30, Gov. Kate Brown announced that she would reject all Title X funding if the Department of Health and Human Services adopts new Title X rules. The Protect Life Rule would prevent abortion providers from qualifying for money under the Title X family planning program. It is estimated that this would cut $50 to $60 million of the more than $500 million in taxpayer funding that Planned Parenthood receives annually. 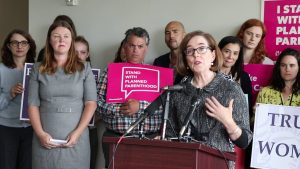 “Governor Brown’s decision is inexplicable,” states ORTL executive director Lois Anderson. “In a bizarre political stunt, she is threatening the healthcare access of over 50,000 Oregonians, 95% of whom are 250% below the federal poverty line.”

“This new HHS rule would only affect funding currently going to abortion clinics. It would not eliminate a dollar from preventative family planning,” continued Anderson. “Every penny would be redirected to federally-qualified healthcare centers in Oregon who do not provide abortions nor share the same staff or facilities as abortion providers.”

“Oregon’s government is facing a tremendous fiscal crisis,” says Anderson. “In just the next two-year budget cycle, the deficit is expected to be between $500 million and $1.1 billion. Where does Gov. Brown expect to make up the difference when she turns down federal help for at-risk Oregonians? She continues to show she is not a friend to Oregonians, but to Planned Parenthood of Oregon.”