Yesterday afternoon, the House Health Care Committee heard HB 4135, a bill which we have been sounding the alarm about because of how it endangers patients with dementia and Alzheimer’s.  The hearing made it clear that the bill has serious flaws and a committee vote was delayed until tomorrow morning!

We want to thank the thousands of pro-life Oregonians who have called and emailed their legislators about the dangers of HB 4135.  Your voices have made an impact already.  We also want to thank the crowd of pro-lifers who showed up to make a statement yesterday.  Several even signed up to testify, although the committee chair only allowed 22 minutes of public testimony, of which only two people who opposed the bill were allowed any time. 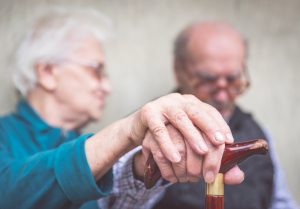 Our opposition to HB 4135 has been labeled baseless.  Authors of the bill would like you to believe this is a simple “update” to the advance directive document.  But yesterday our concerns were confirmed.  Supporters of the bill acknowledged its flaws.  Some of their testimony even conflicted.  The most dramatic testimony came from two of the bill’s supporters who testified that the bill will enable the killing of Oregonians with dementia by stopping their food.

Bill Harris, the man who went to court in order to starve his wife who had dementia, testified that he supports this bill because he was unable to do so under current law.  He also stated that this bill is the only the “first step” in a “nasty” and “ugly” process.  He even called his wife’s advance directive a “right to die document on her terms,” even though she did not indicate anywhere on it that she did not want basic assistance with food and water.

Bill was followed by a man who represents End Choices, a group seeking to expand assisted suicide to people who are not terminally ill.  His testimony included the bizarre and frightening statement that people who are not terminally ill should be diagnosed by a doctor as terminal so they can be killed.  Even more significant, he said advance directives should allow a person to indicate that if they get dementia and become dependent their caretakers are then “obligated to medically end” their life.

This is what we’re up against.  The pro-death crowd supports this bill because they know it advances their cause.  HB 4135 does not protect dementia patients from people like Bill Harris who want to re-interpret a patient’s wishes.

You can watch the full hearing on HB 4135 by clicking here, then click on “HB 4135 Public Hearing” below the video.