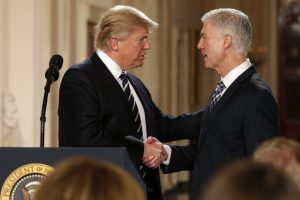 “We are thankful that President Trump followed through on his promise to nominate a Supreme Court candidate with a judicial record that demonstrates respect for laws that protect life,” said Gayle Atteberry, ORTL executive director. “We hope that his confirmation is the first step towards restoring legal protection of innocent unborn American children.”

Gorsuch is widely respected in conservative circles. As for his pro-life views, Gorsuch sided with the state of Utah in its attempt to defund the Planned Parenthood abortion business. He has said, “No constitutional basis exists for preferring the mother’s liberty interests over the child’s life.” He also strongly opposes assisted suicide, authoring the book, The Future of Assisted Suicide and Euthanasia, which argues against both practices.

“We do not support our own Senator Merkley’s threats to filibuster this excellent candidate simply because he is not in favor of abortion rights,” said Atteberry.