National party conventions are always good political theater. The Republican convention did not disappoint. There are still powerful players who want to see two pro-abortion parties, but for now the GOP remains pro-life. This is thanks to pro-lifers across the country who sent delegates to Cleveland with the goal of preserving and strengthening the pro-life planks of the party platform.

A party platform is “a document stating the aims and principles of a political party.” The 2016 Republican platform is the most pro-life GOP platform adopted in its history. It stands in stark contrast to the 2016 Democratic platform (which has pro-life Democrats upset). The Democratic platform calls for the repeal of the Hyde amendment. For 40 years, this amendment has prevented federal funds from paying directly for abortions through programs such as Medicaid.

The Republican platform expresses clear support for pro-life principles. It also contained as an extensive list of desired pro-life legislation, including a 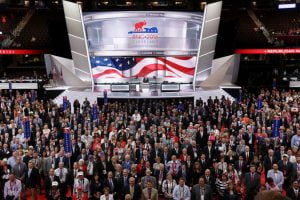 ban on public funds to Planned Parenthood. It called for federal legislation making it a “crime to acquire, transfer, or sell fetal tissues from elective abortions.” The platform also celebrates the contributions of millions of Americans who care for women and babies in life-affirming ways including counseling, medical services, adoption counseling in addition to basic needs like housing and nutrition. We encourage you to become familiar with both documents. Take every opportunity to ask candidates in your area whether they agree or disagree with the platform.

Before the convention, the choice of Governor Mike Pence as the Vice Presidential candidate put one of the nation’s most dedicated pro-life leaders on the ticket. NPR reported: “As a member of the House, Pence introduced legislation to defund Planned Parenthood and other clinics that perform abortion beginning in 2007, long before cutting off Planned Parenthood became a GOP rallying cry last year. He also supported bills that would require women to get an ultrasound before an abortion.”

It was disappointing that no convention speaker gave more than a passing reference to life issue or used the opportunity to lay out the positive vision of life expressed in the Republican platform at the podium. That is all the more reason for each of us pro-life advocates to be speaking out at every opportunity.