The Supreme Court (SCOTUS) ruled 5-3 in the case Whole Woman’s Health v. Hellerstedt, which challenged a Texas law mandating abortion businesses abide by the same health and safety standards as all other ambulatory surgical health clinics.

Whole Woman’s Health, an abortion facility, challenged two provisions of HB 2. They claimed it created an “undue burden” for women seeking an abortion. One required that abortionists have admitting privileges at a hospital within 30 miles distance. The other required clinics abide by the minimum standards required of other ambulatory surgical facilities in Texas. These provisions of House Bill 2, signed into law by Governor Rick Perry in 2013, were originally struck down. However the Fifth Circuit Court of Appeals overturned the lower court’s ruling and upheld the law. Challengers then brought it before SCOTUS.

Sadly, women seeking abortions in Texas will be in greater danger after today’s Supreme Court ruling. The only “burden” this law created was for the abortion businesses who would have had to bring their facilities up to state health and safety standards. Planned Parenthood has even admitted that over 200 Texan women annually need hospitalization following botched abortions. There is no reason now to think this number will change. 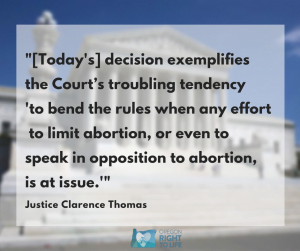 Justice Thomas, who authored the dissenting opinion in today’s ruling, wrote, “Today the Court strikes down two state statutory provisions in all of their applications, at the behest of abortion clinics and doctors. That decision exemplifies the Court’s troubling tendency ‘to bend the rules when any effort to limit abortion, or even to speak in opposition to abortion, is at issue.’”

Unfortunately, women seeking abortion in Oregon remain in the same jeopardy as Texan women. In Oregon, abortion businesses remain completely unregulated.  Abortion advocates have fought vehemently against legislation which would require Oregon abortion businesses to come up to the standards of all other ambulatory surgical centers. At the present time, tattoo parlors, and even veterinary clinics are regulated by the state and are safer than an abortion clinic.

We may be discouraged today but we’re going to continue fighting for women, for babies, and for life.