In rallies around the state, thousands of Oregon pro-lifers gathered to commemorate 43 years of legal abortion under Roe v. Wade, the Supreme Court decision that legalized abortion throughout all nine months of pregnancy. Since January 22, 1973, approximately 58,586,256 unborn babies have died from abortion.

The state rally, held in Portland’s Pioneer Courthouse Square, drew 2,000 enthusiastic pro-lifers, who joyfully endured a mild rainfall. Keynote speaker Lila Rose encouraged the crowd with her energy, youth, commitment, and wisdom. Attendees were drawn to many booths surrounding the square. Following the final song, pro-lifers participated in the March for Life, a further opportunity to spread our message of life to Portlanders. 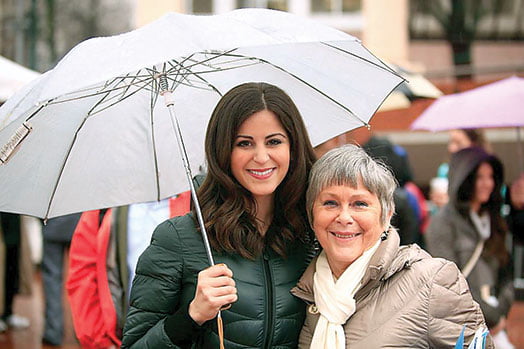 Oregon Right to Life executive director Gayle Atteberry stands with rally keynote speaker,Lila Rose. Rose, founder and president of LiveAction was the first to do undercover investigation of Planned Parenthood,posing as a scared,pregnant teenager.

For students, the day was not over. As they walked to the student rally location, they found it was surrounded by picketers chanting ugly slogans. The young people paid no attention to them as they entered the building, looking forward to hearing music and Lila Rose’s special message. Lila began her pro-life activism at the age of 15 and her message resonated with the students, motivating them to return to their communities and take a stand for life.